Not Exactly How I Thought it Would Go…

The day started out uneventful though extremely hot. The weather has been brutal this summer! I had my camel pack full of half water and half sports drink, which I probably won’t do again or at least not that flavor! I expected to arrive at the rally early Friday evening, on my bike and set up camp near a woman named Dawn whom I’d ridden with before and I knew would be at the rally. Instead, I arrived early Saturday morning, driving a 10’ Uhaul, bike strapped inside with a flat back tire.

I was less than 100 miles out when the bike was shaking in a way I’d never felt before – I couldn’t even read the GPS from the intensity of the vibration. I pulled off at the next exit and got to a gas station and woo hoo! my first flat tire. I called the boyfriend to share what was now becoming an adventure. I had to unpack everything because I couldn’t get the bike on the center stand with all the gear on it – it was SO hot and there was no shade by the air pumps. I was starting to overheat which makes me nervous because I tend to get physically sick when this happens but I did my best to not focus on that. While I was attempting inflation, he searched for bike stores in the area to see if we could get the tire plugged, because it was inflating but it wasn’t holding air. He found some bike stores near the GPS coordinates I gave him, one being very nearby, so I puttered along in 2nd-3rd gear to the shop arriving just before they closed.

After some discussion with the two mechanics, the boss lady and getting the boyfriend back on the phone, the boss of the store declared they would not plug the tire for liability reasons, which I totally understand (though still frustrating). She also kept referring to a young girl who died on her bike recently and she didn’t me on her head (very encouraging at that moment). One of the mechanics suggested the Uhaul in the next town.  The two mechanics went home when they were sure they could do nothing else besides sell me some CAM straps and soft ties.

The boss drove me to the UHaul in a blissfully air conditioned car where a pokey but pretty girl checked me out and gave me the keys. Much to my “delight”, it was a 10’ truck that I had to back out into traffic and people, with a building and dumpster surrounding me. And no rear view. A guy walking by saw my consternation and offered to back the truck out for me. Wherever you are – you are wonderful!

I followed her back to the shop and lined the truck up with the store’s bike ramp so I could load the bike. Of course, the ramp was higher than the bottom of the truck and so I was going to have to let the bike drop almost a foot to get into the truck. Mind you I couldn’t even pick this 450 pound bike up so I was thinking if it fell, that’s how it was going to stay. Thankfully, though, it did not.

The woman, who was suffering from a neck injury and did not know how the cam straps worked, was just making me nervous and it was so hot I thought she was going to pass out right there. I told her to just go ahead home; I’d take care of this. I needed to call the boyfriend and pull myself together which meant a little blubbering first. I had to stop every five minutes and walk out of the truck from the heat. I was overheated at this point and I knew that getting sick wasn’t a question of if but when. In the middle of whimpering, sweating and fighting the straps, Dawn called to see where I was. That meant the world to me and I think that gave me some kind of push, just knowing someone was out there thinking of me. I got those damn straps figured out (after a second call to the boyfriend!) and pulled them tight. That bike was not moving and headed out.

Strapped that baby down

I stopped a Sheetz for gas, to put on flip flops and get water. I knew I needed to be sick so I hung out in the air conditioned bathroom, hoping it would happen there but no such luck. I got in the giant ass truck, pulled on the highway and within probably 3 minutes, I had to pull over and vomit on the shoulder, 18 wheelers whizzing buy at what felt like 1000 miles an hour. I would end up stopping 2 more times to get sick on the side of the road. I decided enough was enough. I was staying at a hotel. It was 930 at night. I would get to the rally, have to find where to put up the tent and set it up in the dark, exhausted and nauseous. No thanks. I ended up staying at a truck stop that I’m pretty sure I recognized from overnight trips home on Greyhound buses during college. I called the boyfriend, put my contacts in water in plastic cups (because of course, I left the toiletry bag in the truck), covered them with a silent prayer for no parasitic infections, put the AC on high and promptly went to sleep. 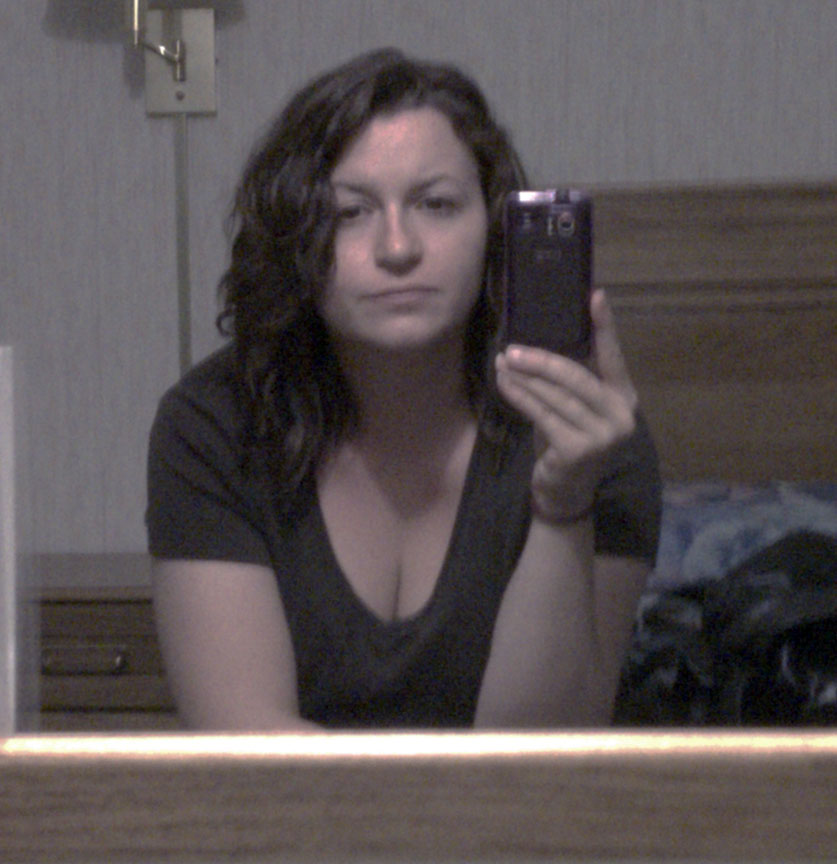 Looking a little rough the next morning

I headed out early in the morning, a little rough around the edges but much better after a good night’s sleep, made it to the rally and had my tire replaced by one of the vendors at the rally and they even put the nail that caused in my tank bag as a souvenir. The first song I heard getting on the highway was Sugarland’s ‘It Happens’– a pretty good way to sum it up! When I got there, Dawn gave me her giant glass of cold ice tea, probably the best ice tea I will have for a long time.